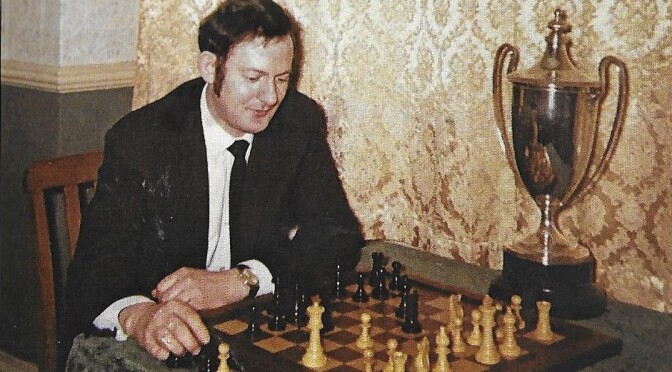 Born about 1944, Richard St George Upton seems to have first been mentioned in the local chess column in 1959 when he was a promising young player at Grove School . From 1959 to 1962 the Hastings Schools’ League entered a team in the McArthur Cup and this gave Richard and other promising juniors the chance to gain valuable chess experience. It wasn’t long before Richard became a force to be reckoned with at the Hastings CC and in 1962 he made his first appearance in the top twenty of the county team. In 1963 and 1967 Sussex reached the national quarter finals for the first twenty boards and in 1966 the county went one stage further and advanced to the semi finals. Richard played in all of these matches against Lancashire and made the journey to Birmingham .

In the 1965-66 season Hastings reached the quarter final of the National Club Championship, losing at that stage against Oxford University . Richard was in the team and he won his game against the university side. He was obviously thought to be very responsible for a young player, for in 1963 he became the club’s librarian and by at least 1966 had become Hastings ‘ match captain (probably the youngest person who had ever occupied that post).

In October 1966 the Hastings CC nobly travelled to London to take on the inmates of Wormwood Scrubs Prison and Richard was in the team. The local chess columnist, Frank Rhoden, also occupied one of the boards and he reported that, as the Hastings players stood outside the ‘forbidding’ gates, he was pleased that they were only visitors and not guests of Her Majesty! He added that, as they began playing the match, the sound could be heard of an organist playing the accompaniment to the hymn ‘All things bright and beautiful’, but he felt that ‘Here we suffer grief and pain’ would have been more appropriate!

In 1968 Richard won the Hastings CC Championship for the first time and later that year did well to come 4th= in the main event at the Paignton Congress. His chess career seemed to be going very well at this stage, but then he was involved in a serious traffic accident following which he had to have massive blood transfusions. He was in hospital for some months and a lot of this time was spent in the Queen Victoria Hospital at East Grinstead . He eventually returned to the Hastings team in May 1969, but one imagines that the break from competitive chess would have prevented him from making a challenge for the 1968-69 club championship.

In the 1969-1970 season Richard became club champion again and the club had a very good run in the National Club Championship, reaching the last 16. At this stage the opposition provided by Cambridge University proved to be too strong. In the 1970-71 season the club were knocked out by Glasgow University in the competition, but in this match Richard gained an excellent win against Scottish international, Craig Pritchett.

Richard continued to make appearances for the club into the mid 1970s, but it seems that somewhere in the second half of the decade he ceased to represent the team. I am not sure when exactly he left the club (my last reference to him is at the end of 1976), but it is a pity that this talented player was lost to chess in Hastings and Sussex . Perhaps someone knows if he is still living in Hastings , or perhaps, he, himself, will see this article.

Four of his games can be found below: (to be added at later date as the link has expired)